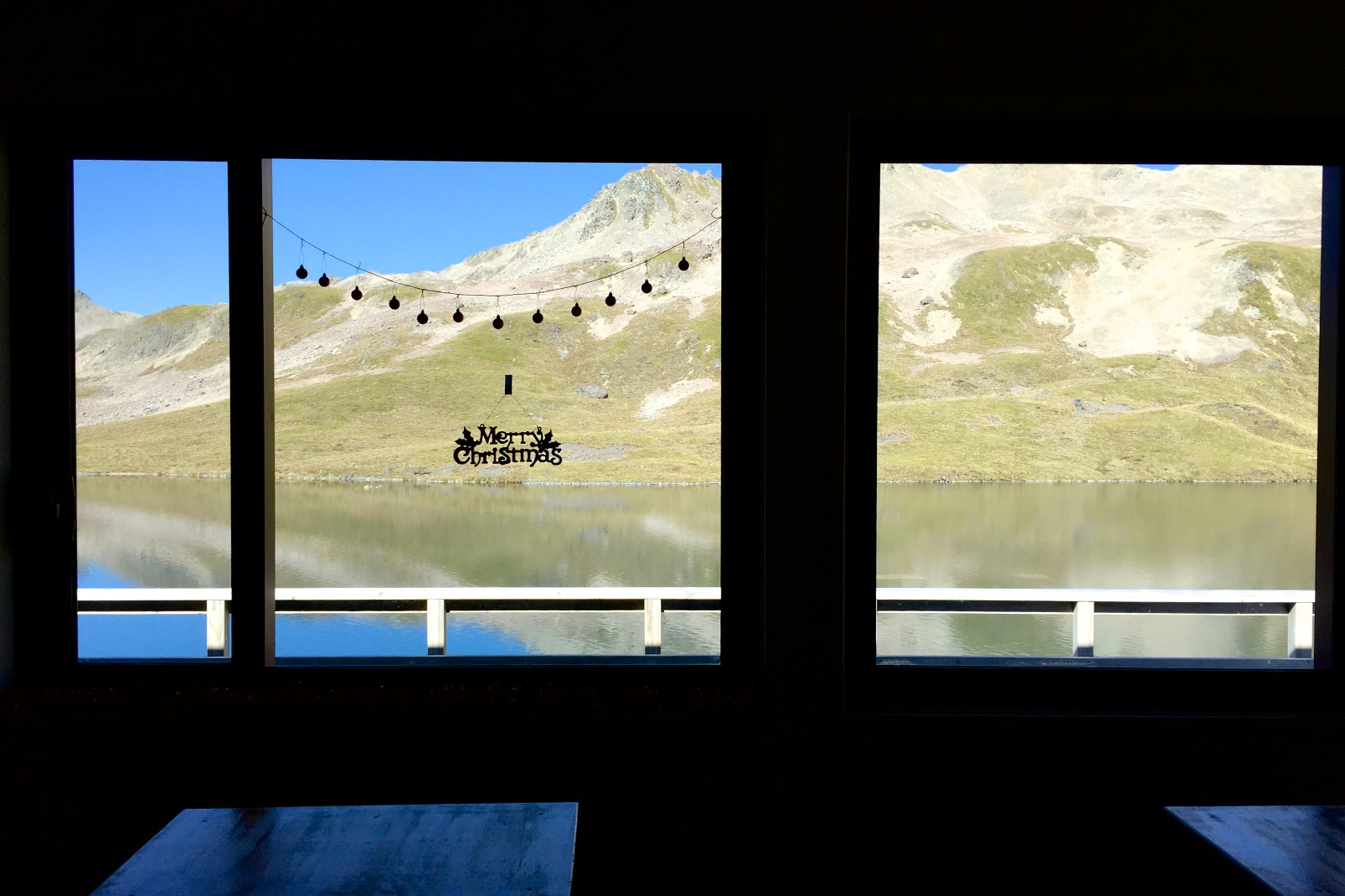 If it weren’t for the howling wind outside I couldn’t be certain we were back in Wellington. Our Christmas road trip around New Zealand’s south island was so long (the longest vacation of our lives, in fact) that life on the road had become life as usual. Wake up in the campervan. Slide open the curtains. Coffee, oatmeal, peanut butter. Pee on a bush. Drive somewhere epic. Repeat.

It was our first Christmas in the southern hemisphere … and our first away from family. Back in the US, holidays meant a week off work to sit around the house with loved ones and overeat. Comfort in good company. But without any familiar faces this year, we turned to the open road in the land of the long white cloud.

Lumix, beware. I shot this trip with an iPhone 6. Here’s 12 photos for our 12 days of Christmas.

Day 1: Wellington to St. Arnaud
Our campervan came with us on the ferry. While Walter enjoyed his privacy in the basement, we enjoyed ours on the deck. From Picton we drove two hours south in the star-splattered darkness to St. Arnaud, base camp for adventure one. 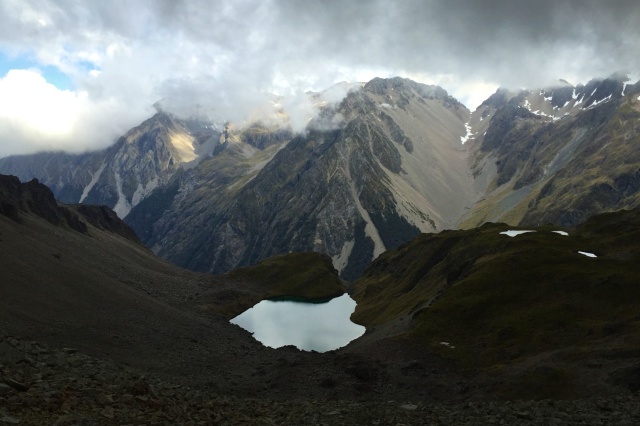 Day 2: Nelson Lakes National Park
In the morning we filled our backpacks and set off on a three-day tramp around Nelson Lakes National Park. New Zealand offers a surprising few number of loop walks. Most tracks are A to B which require two vehicles, a shuttle service or retracing ones steps. Nelson Lakes offers several outstanding loops that can be completed in a weekend or a week. We chose Robert Ridge to Angelus Hut to Coldwater Hut and back along the lake. About 18 miles. From the carpark it was seven hours up Mount Robert and along a knife edge ridge to Angelus Hut. This photo is indicative of the park’s landscape. Alpine tarns. Mars. Massive summer snow mountains. 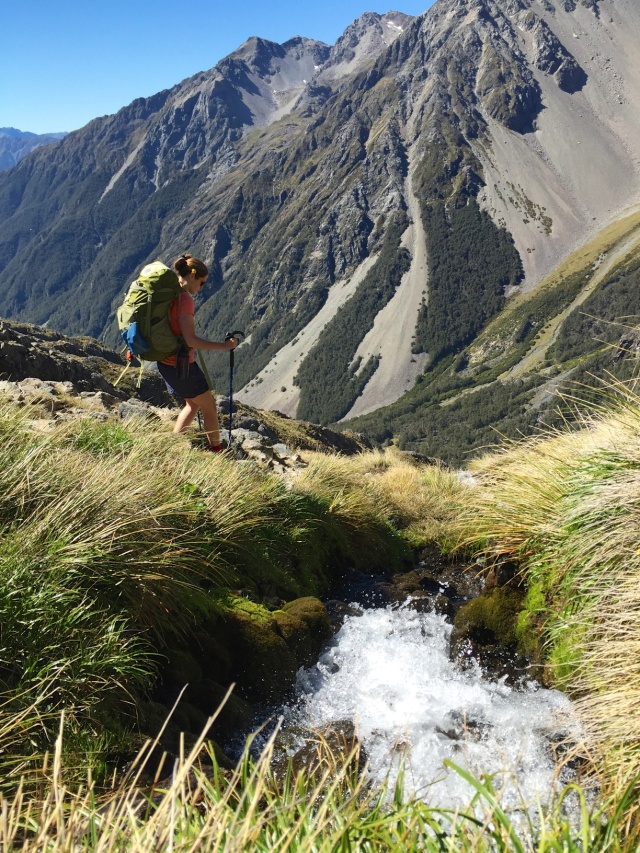 Day 3: Nelson Lakes National Park
What goes up must come down. Day three we lost all the elevation we gained the previous day. Pictured above is Jess beginning her steep decent along Cascade Track. Moments after this picture humpty dumpty took a great fall over a switchback wall, cutting her elbow and severely bruising her back. Thankfully her pack broke the 5-foot fall onto jagged rocks. That nothing broke but her spirit was a Christmas miracle.

Day 4: Nelson Lakes to Greymouth
Hurray! All in one piece and with the tramp behind us, we began our highly anticipated drive down the west coast. The South Island’s west coast is famous for two things: isolation and rainfall. Boasting a staggering 21 feet of annual rainfall, it’s no surprise that only .8% of the population lives here. The drive was immaculate. Bare-chested and footed I jumped out of the van at every turn to shoot the immense beauty. Lush hills and empty beaches, the drive reminded me of Maui’s road to Hana. That night we grabbed a shower and a good night’s sleep at Global Village in Greymouth, an A+ backpackers lodge. 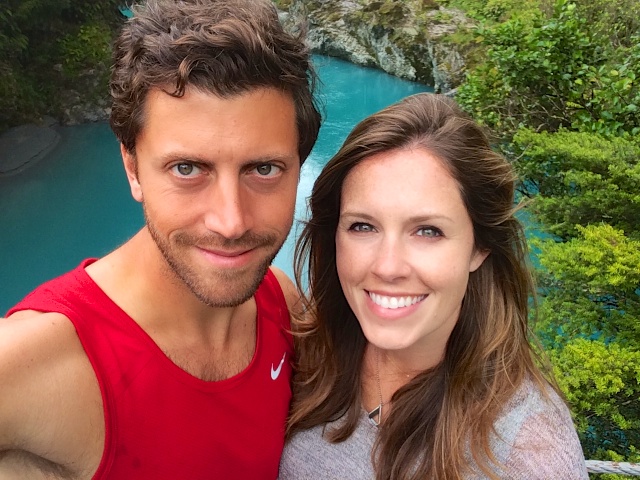 Day 5: Greymouth to Jackson Bay
Further south we hit the obligatory stops at Pancake Rocks, Fox Glacier. In Hokitika we peeled off the main road and into the must-see Hokitika Gorge. The turquoise river behind us is #nofilter thanks to the magic of glacial rock flour. Later, back on the highway, we skipped the turnoff for Haast Pass and continued south along a forgotten road to the very bottom of the west coast. The sandflies in Jackson Bay must be experienced to be believed. We were swarmed within seconds. As for dinner that night, we rolled the dice with carbon monoxide and cooked inside the van. Even if we had died it would have been a better fate than those bugs. 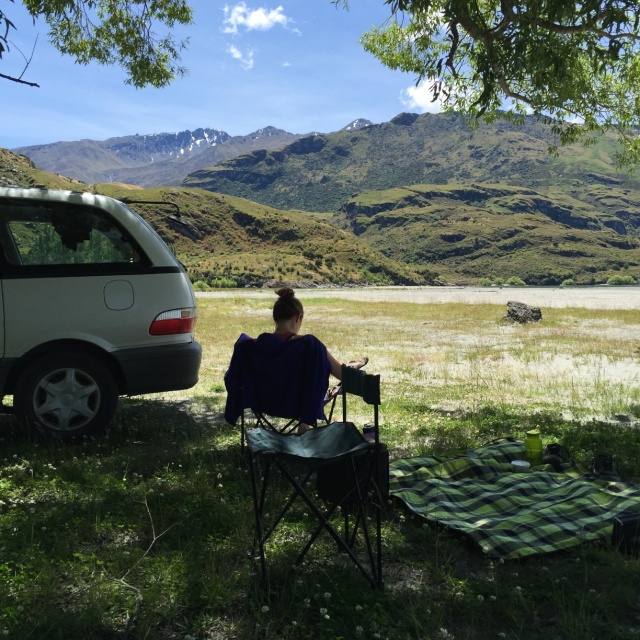 Day 6: Haast Pass to Wanaka
Skipping morning coffee for good reason we awoke on day 6 and crested Haast Pass into Wanaka. Inland, the rain became extreme sunshine. So extreme in fact we both gave up our trail runs after 30 minutes for lack of water and stupid dry heat. We set up shop by the lake instead and read books in the shade. 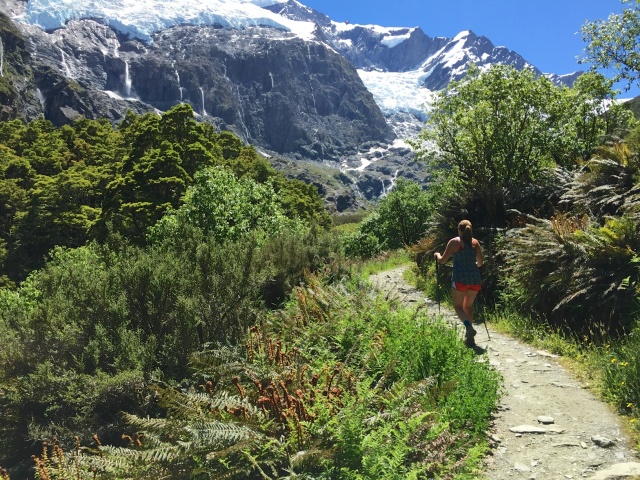 Day 7: Mount Aspiring National Park
One major highlight of this trip was the Rob Roy Glacier Track in Mount Aspiring National Park. Thanks for the tip Sue. After negotiating a 50K dirt road with deep grooves and a number of river crossings, we arrived at the trailhead and began the three hour return hike to Rob Roy Glacier – AKA ecstasy of the eyeballs. Enormous blue-ice hanging glaciers melting into heaven-to-earth waterfalls. Rocky gray summits contrasted by summer flowers in the valley. Just wow. 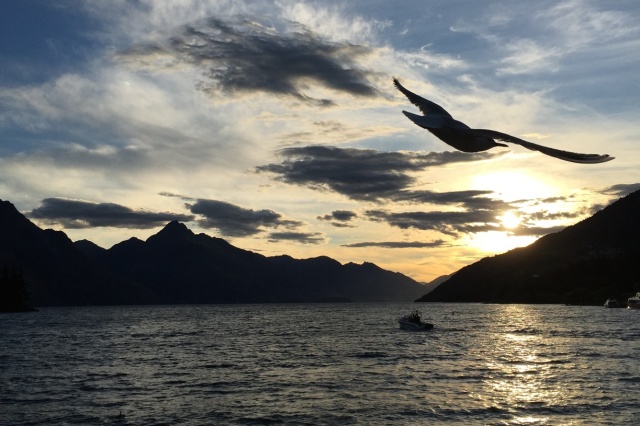 Day 8: Queenstown to Te Anau
We spent the night in Queenstown with our new Wellington friends, Emily, Bethany, Claudia, Julia and their crew. They invited us to join them for dinner and the night at their place in Kelvin Heights. We gladly accepted, eager to absorb the good company and grab another night in the South Island’s most cosmopolitain city.

Day 9: Milford Sound
Milford Sound is perhaps the most iconic travel destination in New Zealand. Tucked away in the southwest corner of the country, in Fiordland National Park, the drive there alone could provide a year of Instagrams. The high rainfall creates thousands of waterfalls that explode over of neck-crainingly high walls into the Tasman Sea. Like the sandflies, that shit must be experienced. All kayaking trips were cancelled due to high wind, so we purchased a well-worth-it sightseeing cruise from Southern Discoveries and enjoyed the scenery from a boat. Back in Te Anau we rocked a New Year’s Eve concert that night at Redcliff Cafe. A bit of reggae metal with the locals, why not.

Day 10: The Catlins
From Te Anau we drove to the southernmost point of the South Island – Curio Bay in the Catlins. This was my favourite overnight of the trip. There we snapped pics of the world’s most endangered penguin, the yellow-eyed, then drove out onto this cliff where we camped and watched the sun set over the Southern Ocean. Next stop: Antarctica 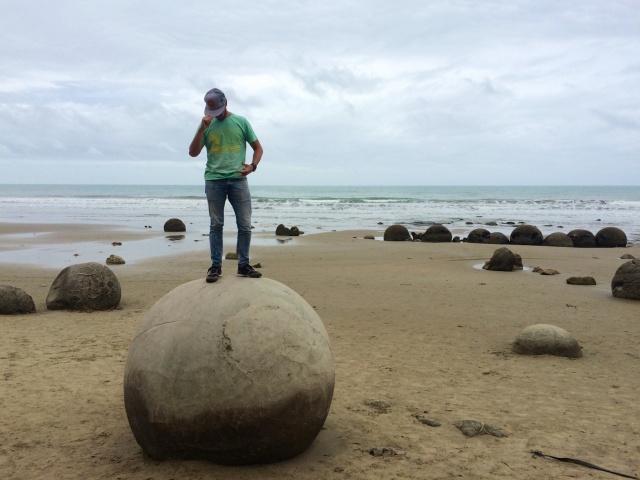 Day 11: The Catlins to Timaru
The beginning of the end. On the morning of day 11 we started our return north. From the Catlins we motored east around the southern shore, up through Dunedin and into Timaru for a much-needed night in bed (only our second of the trip). Along the way we stopped at the Moeraki Boulders – 60 million year-old wonders of science, rounded over the years by erosion and tourists jumping on them.

Day 12: Christchurch to Wellington
On our way to Picton we stopped in earthquake-ravaged Christchurch. Five years after unimaginable devastation, the city is still rebounding. Instead of buildings, cranes dot the skyline as builders from around the globe work put the city back together again. It’s a sad story but a rare opportunity to start from scratch. Build the city people want. Make it smart and beautiful. I’m curious what becomes of it.

And just as Christchurch rebuilds itself, so too do we. Now back in Wellington, we’re still adjusting to indoor plumbing and life as usual. Though thankfully it’s still pretty unusual. Hope you guys had a wizard-filled holiday as well. 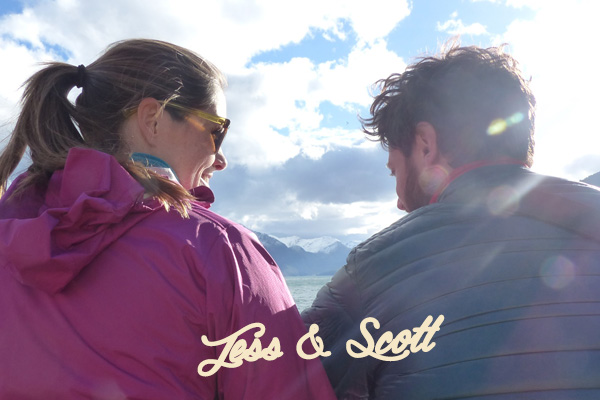